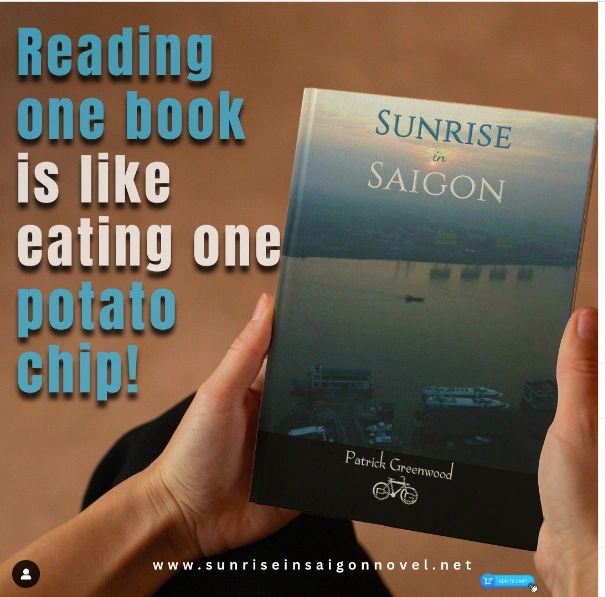 Sunrise in Saigon A Novel for our Time

Proceeds from the sale of "Sunrise In Saigon" novel

Give a Vietnamese child a helmet; save a life

Helmets have been proven to reduce the risk of head injury by 69% and death by 42% - helmets gets us part of the way to our goal of a safer road system for Vietnamese children.

With echoes of Tom Clancy and Jack Higgins, "Sunrise in Saigon" is Patrick Greenwood's first book in a new series about cybersecurity, passion, and international espionage.
Intrigued by the country of Vietnam since 11, Jack Kendall long remembered the fall of Saigon in 1975 and its painful aftermath. Jack learns from eyewitnesses about the long shadow of the Vietnam war, its atrocities, and its aftermath.  He knows a couple who met under the most extreme circumstances, one on the helicopters leaving Vietnam, the other stranded behind. The two swore to find each other again and did, decades later.
That story resonates with Jack as he finished serving honorably in the United States Marine Corps and embarked on a career in cybersecurity technology. Even with this career success, his life is not fulfilled.  His health, both physical and emotional, deteriorates. He turns to cycle and returns to his fascination with Vietnam.  His research leads him not only to that country but to a captivating woman. While in Vietnam, he sees the beauty of the people and the land and its poverty, graft, and human trafficking.  It is through his relationship with the country and his newfound love that his life is transformed.

Even if he loved her deeply, Jack decided not to run back to Linh. Linh, soon to be a mother choose to relocate from Vietnam to Canada along with her husband and daughter Ngoc.


As he looked at the sunset, Jack thought about what to do with his life. He decided to return to Nella, his new girlfriend. Soon they'll head to Portugal to meet Nella's parents. Jack feels that his life is finally getting some order. William, his oldest's child, has become a thriving software architect working at Cybercom. Regina, his daughter, left the Coast Guard to attend Law School. After graduating with honors, she was recruited by a major law firm. However, all that glitters is not gold. The darkest forces are planning, destroying, and opening his way into Jack's life.


The law firm that recruited Regina has shady ties with China and the People's Liberation Army cybersecurity forces. Jack's great adversary, Travis Jones, can't get over the failed bid for the Vietnam World Bank Project.


Travis, General Vo, head of China's PLA cybersecurity forces, members of the Fong Gao Triads criminal organization, and the world's best hackers are working hard on planning and plotting the perfect scheme to execute the hack of the century.


While traveling in Europe in the company of his new lover, Jack is oblivious of Jones's global conspiracy, which will directly attack both of his children, his company, and himself.


An old friend will come to Jack's rescue, but will he come in time to avoid a tragic loss? Will Jack get to defeat the hacking groups behind operation Dragon Vault's plan to hack the island of Taiwan?

While finally catching up to this nemesis Travis Jones, Jack brings closure to the one that had his wife to be Nella killed in Portugal. Along with Jack, Forest also chased a demon of the past by discovering Dimi Zosh, a Russian Mafia killer and special forces solder from the Afghanistan occupation in 1980's is still alive. Dimi, along with his Russian hacker group, "Corky Park" attempt to steal bitcoins from both the Japanese and Taiwan exchanges. Lilian Tang aka "Vulteress" continues to grow her sexual conquests while also killing victims throughout the island.

With the Russian hacker group attempting to steal billions dollars of bitcoin Jack joins forces with Special Agent in Charge Gerald Burns of the FBI along with Special Agent Bill Parker of the React 5 team. The agents travel to Okinawa to help hunt down the Russian's along with trying to arrest Lilian Tang before the Yukuza kill squads find her first!.

Patrick Greenwood, after military service, he embark on the 25-year career in the information technology field working in various roles in sales, engineering, support, and design. Many of his inspirations for writing came via this business travels to places like Vietnam, China, Japan, Taiwan and Portugal. A true believer in listening to one’s passion, Patrick began writing in early 2020 based on several trips he made while cycling in various countries. In this novel, “Sunrise in Saigon”, Patrick draws upon several non-fictional events that happened in Vietnam including the war with the US, the last days of Saigon falling, and the chaos at the US embassy. Having remembered these events as a young man, Patrick grew up wanting someday to travel to Vietnam and visit these places for himself.

In 2012, Patrick did make the first trip to Vietnam to find the lost US embassy and the catholic nuns that helped with “Operation babylift. Patrick followed his passion for cycling by completing several bike tours in Ho Chi Minh City and the Mekong delta regions.

Patrick is a holder of a B.S and MBA in Global Marketing   along with completing several post-graduate certificate programs in information security, Internet of things, and global management from MIT. Patrick is married and resides in Carlsbad California.

Sign up to hear about upcoming book launches and book signings!